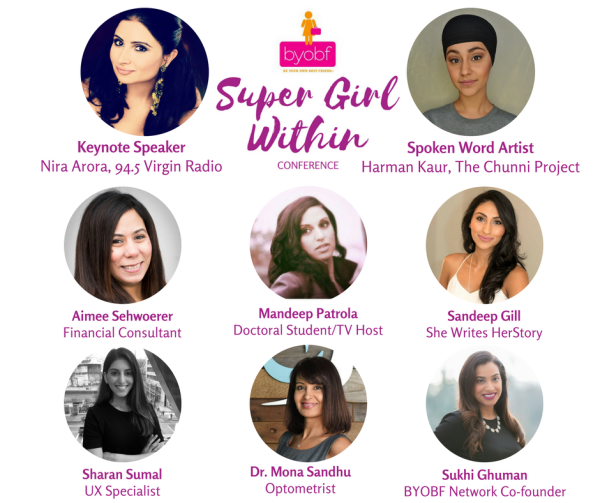 BYOBF Network is excited to be hosting the first Super Girl Within Conference for Grade 9 girls in Surrey at L.A. Matheson Secondary School on February 8, 2017.

This full-day conference will include the “Voices of Experience Career Panel Discussion” and will feature professional women working in a variety of different industries sharing their experiences and advice regarding the path they decided to take. The panel discussion will be facilitated by former television host, and BYOBF Network co-founder, Sukhi Ghuman. 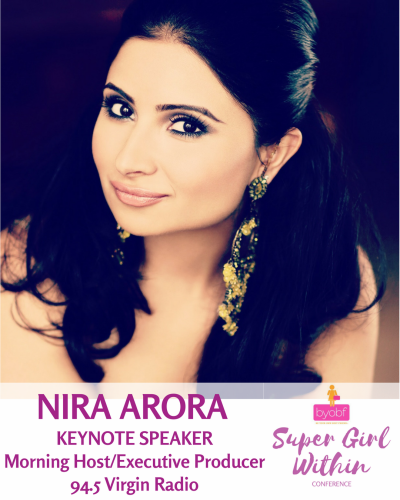 Nira is a proud Island girl who grew up in Nanaimo and moved to Vancouver to become an SFU and BCIT alumni. Prior to joining 94.5 Virgin Radio, Nira was a host, reporter, writer and producer for many different television shows and local magazines. She now has 20 years of experience in the media world!

Nira is a huge believer in Karma. She plays an active role in the community, volunteering her time for various charities including BC Children’s Hospital and The United Way. Nira keeps herself busy with freelance television, blogging and writing columns for various sources.  ‘Nira’s Hot List’ has been around for 10 years where Nira reviews this and that and gives her take on ‘What’s Hot’.

She loves to spend family time with her husband Garry, her sons Shae and Aavi and English Bulldog BosKo. She also enjoys sports, spiritual books, chocolate, wine, vampires and scary movies!! A few blush worthy accomplishments for Nira: writing for ‘Vogue India’, being a Nordstrom ambassador, guest hosting on ‘The Social’ and TV Week also credited Nira as one of BC’s 10 Most Beautiful People. She’s taking the latter to the grave, needs proof to show the grandchildren…. one day!!

Harman Kaur is a sikh writer, a spoken word artist, and an intersectional feminist, born and raised in Abbotsford, BC. She is the founder of The Chunni Project, a platform that empowers and promotes South Asian women all across the world. Harman is a third year student at SFU, where she is majoring in English. She is on a journey to becoming a professor at a university, publishing many books, and empowering the women around her. Sharan’s passion for product innovation was ignited during her very early years with Daily Hive, Western Canada’s largest online only media publication.  Having been a founding member of the company from it’s inception as Vancity Buzz to it’s evolution as Daily Hive, Sharan acquired a deep knowledge into the digital product space.  Outside the digital environment, Sharan also brings a unique perspective to her work with her experience in the Healthcare Industry.  Coming from a background in Psychology and Criminology, Sharan spent eight years working in the Mental Health and Addictions field – primarily with the extraordinary people of the Downtown East Side.

The combination of her strong understanding of human behaviour and vast knowledge in helping to grow a successful business is what makes her viewpoints on the tech industry so unique. Sharan’s greatest passion lies in solving complicated problems with creative minds to create digital products that add value to people’s lives. 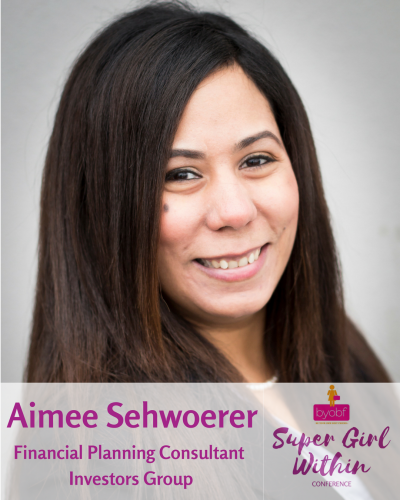 Working with Investors Group as a Consultant since 2013, Aimee helps achieve financial goals through various areas of financial planning. She builds and maintains strong relationships by delivering sound advice on investment, debt and estate planning issues that we face today, by offering quality financial advice with a focus on short term and long term planning for Canadian families and growing businesses.

Her extensive work with the community has led her to share her passion and vision of the Financial Industry, interviewed many times by local entertainment television and Magazines, she’s a strong advocate on empowering women’s all over the world leading and extensive volunteer path with several organizations in Vancouver such as : Forum for Woman Entrepreneur, BYOBF, The City of North Vancouver, and most recently I’ve been appointed as the Vice Chair of the Latino Canadian Chamber of Commerce. 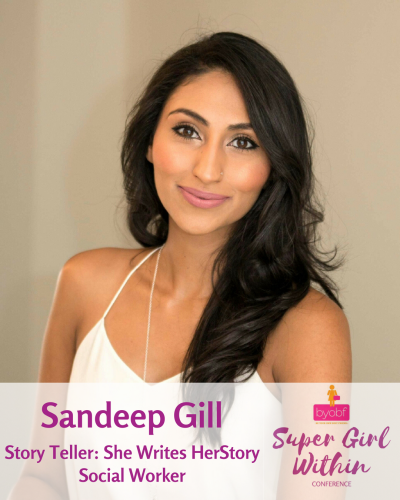 Sandeep Gill is a Social Worker, working as a Family Strengthening and Development Counselor in Surrey. Her professional background includes working in Child Protection Services and serving as a Project Manager for an NGO in Peru.
Sandeep is the founder of She Writes HerStory, a platform dedicated to raising awareness around the systemic oppression faced by South Asian women, through poetry and storytelling. Sandeep created She Writes HerStory to break down the taboo topics affected by many women, such as mental health, sexual abuse, domestic violence and much more. As the She Writes HerStory community grows, Sandeep is creating innovative ways to serve the needs of her audience, she is currently working on publishing her first book as well as curating community events focused on celebrating women’s voices. 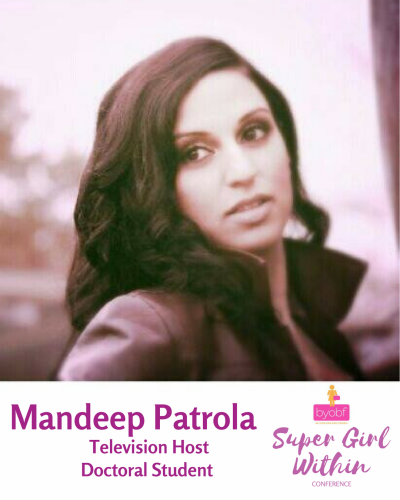 Mandeep is passionate for academia and attended UBC and is now pursuing doctoral studies in Neuropsychology/Clinical Psychology. In addition to her passion for human brain and behaviour functioning Mandeep is a gifted entertainer! She is an actress, and lively television host. She is also very active in the community at large and a motivational and inspirational speaker having been awarded by the both the Premier and Prime Minister for her community activism.

Athletics and sport has been a part of Mandeep’s life from childhood. She is a black belt in the martial arts, having won several women’s black belt championships and trained with esteemed martial artists across the continent. In addition to her endeavor in sport she is also extremely passionate about culture and dance having been the captain of the esteemed UBC Girlz Bhangra Team, the first all female competitive team which competed and performed throughout North America breaking barriers in their reign and is also a director of The Vancouver International Bhangra Celebration Society.

Mandeep’s message is that we all have been blessed with immeasurable powers to achieve and make positive changes in not only our lives but the communities we live in.  In the words of Stephen King “ you can, you should, and if you’re brave enough to start, you will.”

Born in New Delhi, India, Mona Sandhu immigrated to Canada with her family at the age of 6 and settled in Toronto, Ontario. In the last 2 years of high school, she chose to pursue a career in Optometry. With that goal in mind, she attended the University of Toronto and graduated with a BSc, majoring in Nutritional Science. She obtained her Doctor of Optometry at the New England College of Optometry in Boston, MA. During her final year in Boston, Dr. Mona Sandhu met her husband-to-be, Paul, and they moved to beautiful British Columbia. A few years later, she opened her first practice, Fleetwood Family EyeCare.  In 2008, Dr. Mona decided to sell the practice and devote time to their two growing children.  8 years and 2 teens later, she opened her second practice, Clayton Heights Optometry, where she is currently practicing. 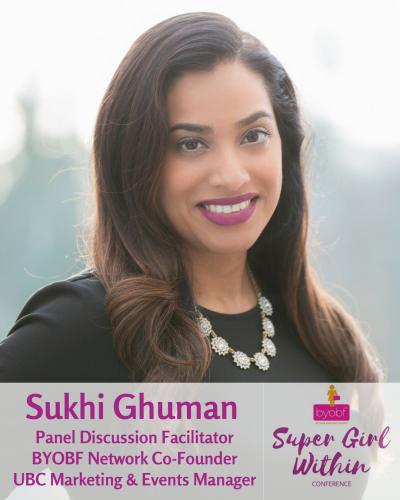 Sukhi Ghuman co-founded the BYOBF Network in 2006. She has spent over 10 years working in various sectors of the entertainment industry, as a producer, writer, television host and reporter for Shaw Multicultural Channel and Shaw TV. Currently, Sukhi freelances as a Digital Marketing Strategist, with an emphasis on branding and social media. Sukhi is also a lifestyle photographer and works as a Marketing and Events Manager with the University of British Columbia.

In addition, for the past twelve years, Sukhi Ghuman was a Board of Director with the Vancouver International Bhangra Celebration (VIBC) Society  and has volunteered her time to host of the, “A World of Smiles” Telethon in support of BC Children’s Hospital for twelve consecutive years.